In mid-April 1951 we began a series of daytime missions that gave us a different view of war. Chinese supply lines were overextended. The enemy was withdrawing northward, screening their movement with skilled reconnaissance units. We were unaware of this action at the time, but our senior commanders believed that the Chinese were preparing a major attack. In our sector of the 24th Division’s front, the American advance had paused briefly while events developed. It was our mission to determine the situation in our sector.

On a sunny spring day, the three platoons of the 8th Rangers moved from concealed positions, passed through friendly lines, and on different routes to different objectives. Prior to departure we were teasing Tony Velo. He had a little Beretta pistol that he treasured, and he had worked on it till the weapon glowed. Most of us who carried .45-caliber pistols as a side arm thought the Beretta was useful only shooting flies, but Tony loved that pistol. Jimmy White confided in me that he had been detailed to carry extra ammunition for machine gun. Though he would still be with the platoon, he would not be with our squad. He was very concerned about not being with those who were closest to him. It was a separation of only a few yards, but it seemed a world away to Jimmy; I understood his feeling. In battle you feel lost without your friends nearby. 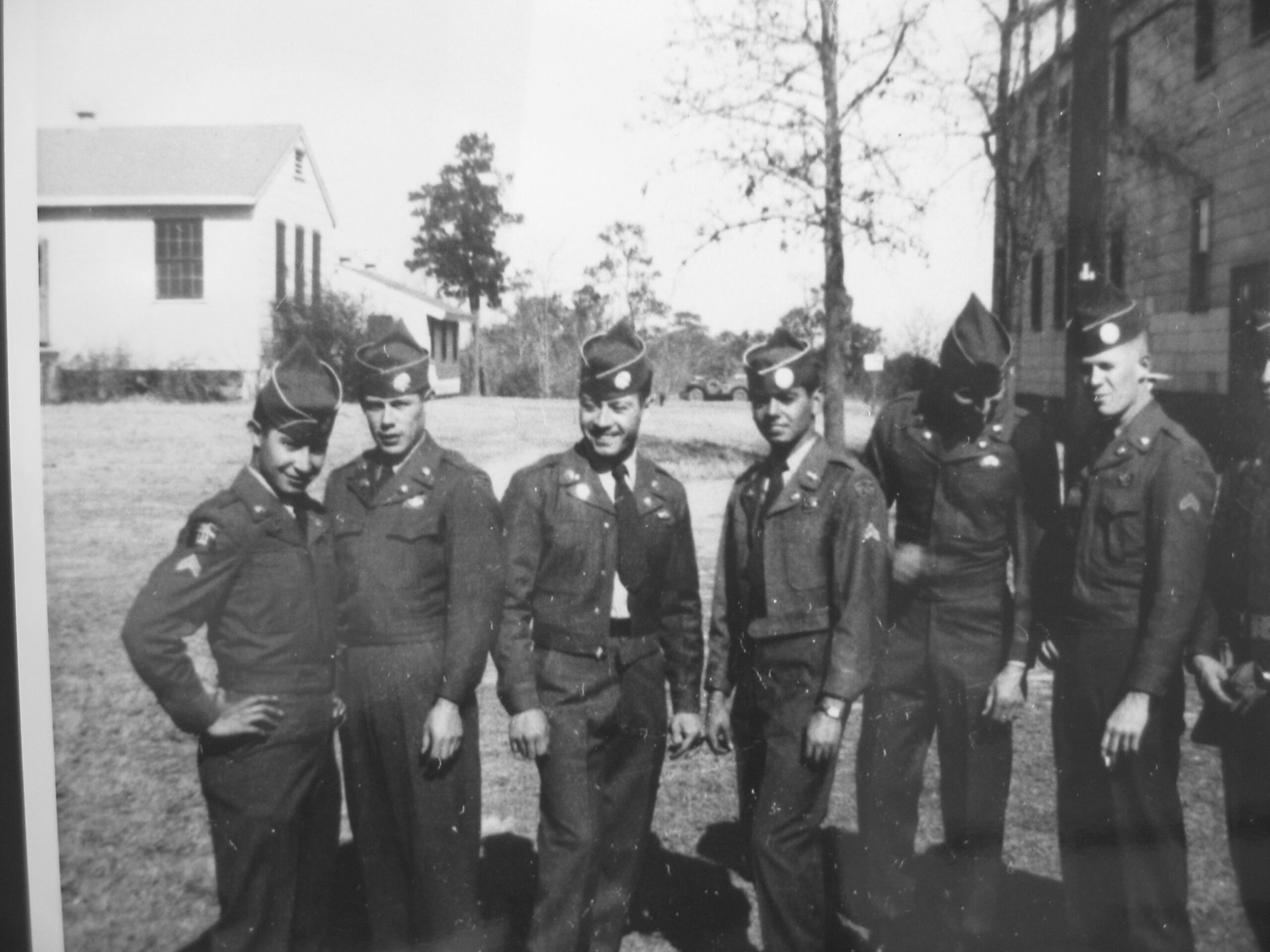 In the 3rd Platoon, our lead scout was Pete Torres. He was called “Silent Pete” for his ability to move ghostlike through rough terrain. Torres was followed by some men with automatic rifles, Lieutenant Strong, and radio operator E. C. Rivera. Stepping cautiously, wary of mines, we moved down a wooden bridge and into intermittent brush and broken ground. We then moved toward Hill 299 which rested between the lines and took its name from its elevation on map. Now and then we could see the high ground that marked the Chinese main line of resistance (MLR). The only Chinese we encountered were rotting corpses, charred black by napalm.

Thirty-three men were on this patrol. If we encountered the Chinese, we had little doubt that we would be seriously outnumbered. The morning wore on, the heat and the expectation of battle rising. Our scouts were not finding the enemy – but war is filled with expecting one thing and finding another. Emplacements were there but not the enemy. We thoroughly scouted the area, found it deserted, and decided it was time to return to friendly lines. 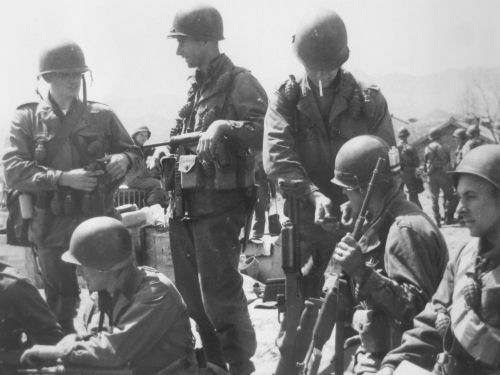 Tree and brush-covered ridgelines ran from the hill, and one of these flanked open ground with woods to either side. We were moving down this ridge when the sound of nearby gunfire from the woods closest to the Chinese lines grabbed our attention. Flushed like a covey of quail a small number of US soldiers came running out of the woods across the open field directly to our front. They were men of the 19th Infantry Regiment Intelligence and Reconnaissance (I&R) Platoon who had been conducting a reconnaissance when they were located by the Chinese. Lieutenant Strong snapped an order and we dropped into firing position, flipping off the safeties on our weapons. The Americans had no sooner reached the woods on the other side of the field than a torrent of Chinese soldiers poured out of the woods in hot pursuit. The discipline instilled during our training held firm. Not a single shot was loosed until the Chinese were in the middle of the open area. Lieutenant Strong gave the command “Fire!” In Ranger lore, what followed became known as the (Hill) 299 Turkey Shoot.

The Enemy did not have a chance, which is the best way to fight a war. We were good shooters and the roar of our fire was deafening. I was one of six BAR men. Firing from the prone position with a bipod supporting the rifle barrel, we had a shooter’s dream. An observation aircraft later estimated that seventy dead lay in the field. Other Chinese had followed their comrades to the edge of the woods, and we now began a firefight with them. Some of their bullets struck home. First to be hit was Pete Torres, who was shot through the face. The sight of Pete, his face covered with blood, numbed my mind. He lost so much blood that I felt certain he would die. Gil “Doc” Gregory was hurrying to his side. Training took over and I continued to fire. I learned later that the bullet went in on the high side of Pete’s right eye, exited under his left jaw, and lodged in his shoulder blade. Doc Gregory extracted the bullet using a pair of fingernail clippers. 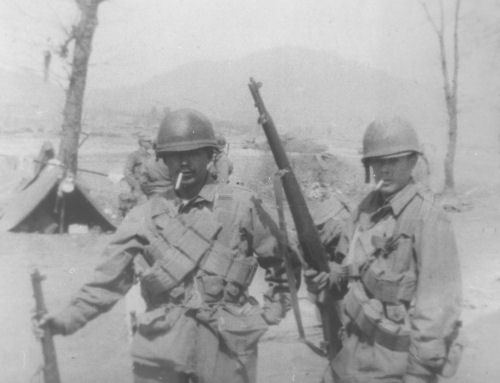 Eventually we achieved fire superiority and were able to force the Chinese to withdraw. Seeing this, Lieutenant Strong ordered us to pursue. With adrenaline flowing, we attacked. We encountered a fortified bunker that stalled our advance. I heard Strong’s voice yelling, “When I throw the grenade, everyone goes!” The Chinese position was destroyed. Firing from the hip, we then continued our advance. A Chinese soldier rose up to throw a grenade, but just as his arm went back, Ranger Bill Williamson shot him and the grenade exploded in the Chinese position. As we drove into their line, the Chinese realized that they were confronting a small force and began to flank us. Now they became the attackers. Mortar rounds were dropping around us, and machine-gun fire and shrapnel were hitting our men. Jimmy, our Little Tiger, was killed either by a grenade, mortar round, a mine, something that exploded at his feet and tore life from him. The Chinese attempted to block our route of withdrawal, and bullets came at us from all sides. Rangers Washburn and Waldecker were hit. We knew, when surrounded, to concentrate our fire in one direction break out. With Strong and Cox leading, we fired and ran, fired and ran.

Like angry hornets, they pursued us while we moved as rapidly as we could, dragging and carrying our wounded with us. A Chinese machine gunner was covering an open space from long range, which we had to cross. Several of us noticed a peculiar circumstance. If an unhurt man was crossing the field, the gunner would attempt to shoot. If someone was carrying a wounded man, the Chinese soldier did not fire. Was this a Chinese Beau Geste, a gentleman warrior on the other side? Was he changing belts of ammunition or firing elsewhere? It was best to take no chances and run like hell.

As we retreated we continued to suffer casualties. Most of us could run, but Tony Velo was seriously wounded, hit in both thighs by automatic weapons fire. We had tourniquets on both of Velo’s legs, but his blood kept dripping. The men to my front took turns carrying Velo on their backs, his hands tied across their chests. We moved rapidly, the scouts running ahead while several of us with automatic rifles covered the rear. As we moved more to the center of the open land between the armies, the Chinese ended their pursuit. To make better time, we followed a dirt pad, used by local farmers and woodcutters; narrow and thick with dust, it ran uphill and down. I followed closely behind the men who were taking turns carrying Velo. As I moved along I could see the bright drops of Tony Velo’s blood settling into the dust of the trail. Exhausted, we reached our lines. Other soldiers came to help with our wounded while the remainder of us rested on the reverse slope of the ridge. After a time Sergeant Cox took us to a truck on which Tony was lying. “Take your last look at Velo,” said Cox, “he’s dead.”