When Anna Mae McCabe Hays joined the Army in 1942 she knew she was signing up “for the duration” of the war plus six months. In all likelihood she had no idea that the Army would be her career, nor how successful that career would be. She certainly had no idea that by the time she retired she would rise to be the Chief of the Army Nurses Corps and America’s first female general officer.

Anna Mae McCabe Hays was born on 16 February; 1920 in Buffalo, New York.  Graduating with honors from Allentown High School and instilled with a strong drive to help others, Hays entered Allentown General Hospital School of Nursing in 1938.

Like thousands of nurses of her generation, Anna Mae enrolled in the American Red Cross following graduation. After Pearl Harbor, inspired by a sense of duty and patriotism, Hays joined the Army Nurse Corps (ANC).  “I joined during World War II.  As you know, the war was declared on 7 December 1941, and from that time until I joined in May of 1942, the papers were full of stories about individuals serving their country. [B]eing a nurse, I too wanted to serve my country.”

In January 1943, she deployed to Ledo, Assam, India, with the 20th General Hospital. Stationed at the entrance to the famous Ledo Road that cut through the jungles into Burma, their mission was to provide care to the American Soldiers building the route to China. Anna Mae was assigned to the operating room and endured primitive living and working conditions including bamboo structures, monsoon weather, dysentery, and snakes.

During her 2 l/2 years there, the hospital took care of more than 49,000 patients. In April 1945, Anna Mae was promoted to First Lieutenant. After the war she elected to remain on active duty in the Army Nurses Corps.

When war broke out in Korea, she mobilized with the 4th Field Hospital, and participated in the Inchon Landing.  Years later she would recall:  “We were always extremely busy both in the Inchon area and later when we had to hurriedly evacuate, in February of 1951, to Taegu at the time the Chinese and North Koreans almost reached the Inchon area. I can remember traveling south from Inchon area to Taegu by train in the middle of the night – not knowing when a railroad trestle over which we traveled would be blown up.”

The 4th Field Hospital cared for more than 25,000 patients between September 1950 and July 1951, one night receiving 700 patients. In the bitter cold and with insufficient supplies, the operating rooms were in constant use. In many ways, Korea was worse than anything Anna Mae had experienced in India, but she recognized the medical advancements that had been made since World War II: antibiotics, whole blood, and rapid evacuation, made possible by the use of helicopters.

In May 1956, Anna Mae reported for duty as head nurse of the ER at Walter Reed Hospital in Washington, DC. In June, President+ Eisenhower was hospitalized there, and Hays was selected to serve as one of three private nurses for him. Over the 23 days of his hospitalization she formed a close bond with the President that lasted until his death in 1969.

By 1963, Anna Mae had been promoted to Lieutenant Colonel, a significant achievement at a time when most nurses retired as Majors, and was assigned to the office of Colonel Margaret Harper, the Chief of the Army Nurses Corps. In September 1963 LTC Hays became the Assistant Chief.

In July of 1967 she was promoted to full Colonel, and on September 1, 1967, Colonel Anna Mae V. McCabe Hays was sworn in as the 13th Chief of the Army Nurse Corps, as position she would hold until her retirement. 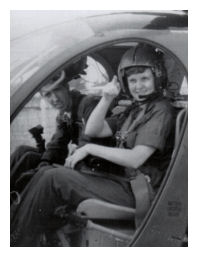 During the Vietnam War Hays travelled to Vietnam three times to assess the state of nursing there. During that time she oversaw formation of new training programs and a dramatic increase in the number of nurses deployed overseas.

Hays’ four-year tenure as ANC Chief was a time of great strides for women in the Army. In November 1967, President Lyndon Johnson signed Public Law 90-130 at the White House with Colonel Hays in attendance. The law removed barriers to promotion for female service members and opened the door for women to reach the rank of general officer.

In the years to come Colonel Hays’ recommendations led to groundbreaking reforms in personnel policies. In January 1970, Army regulations were changed to end the practice of automatically discharging married officers who became pregnant to. In July 1971, Policy AR 601-139 removed the restriction on the age of dependents of female nurses seeking appointment in the Army Nurse Corps Reserve. In addition, regulations were changed to allow for commissary and post privileges for spouses of female service members.

As Chief of the ANC, Hays led efforts to strengthen the organization. Her tireless efforts to increase educational opportunities, recruit qualified nurses, and enforce stronger standards coupled with her work to include more nurses in the Army’s decision making process. These efforts to increase the prestige and professionalism of the ANC contributed to a growing respect for nurses and women in the Army and the country as a whole.

On 11 June 1970, Colonel Anna Mae Hays was promoted to Brigadier General and became the first woman in the United States Armed Forces to wear the stars of a general officer.  Immediately following her promotion, Elizabeth P. Hoisington, Director of the Women’s Army Corps was also promoted to Brigadier General.  In her remarks afterwards, General Hays expressed the view that the stars that signified her new rank “reflect the dedicated, selfless, and often heroic efforts of Army nurses throughout the world since 1901 in time of peace and war.”

Brigadier General Hays retired on 31 August 1971.  Speaking of retirement she said: “Well, I have to be very honest, one day being responsible to The Surgeon General for 21,000 men and women, who represented one-fifth of the more than 103,000 Army Medical Department personnel, and then the next day, not having any responsibility, is quite an adjustment to make. However, I think I did very well. All sorts of things kept me busy. I’ve missed the Army. I miss being part of a moving, dynamic situation.”

Adapted from:  “Embracing the Past: First Chief, Army Nurse Corps Turns 90!”  Courtesy of the US Army Medical Department Office of Medical History

BG Hays on the Draft

BG Hays on Women in the Army

What do they mean? – US Army Rank Insignia