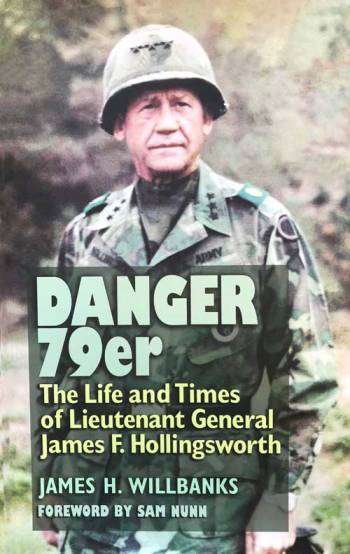 Lt. Gen. James F. Hollingsworth was a three-time recipient of the Distinguished Service Cross along with four Silver Stars, six Purple Hearts, and a host of additional medals and commendations.

Hollingsworth entered the US Army as a second lieutenant upon graduation from the Agricultural and Mechanical College of Texas (now Texas A&M University). In World War II, while leading tanks in Gen. George S. Patton’s Third Army, Hollingsworth encountered dug-in German defenders. He lined up his thirty-four tanks and issued a command rarely heard in modern warfare: Charge! Patton later recognized Hollingsworth as one of the two best armored battalion commanders in the war.

Twenty years later, Hollingsworth served in Vietnam, where he became identified by the radio call-sign of “Danger 79er,” a designation that remained for the duration of his career. He later served in South Korea commanding I Corps (ROK/US) Group, the largest combined field army in the world. Even after retirement from active duty, Hollingsworth continued to serve as a military adviser during the Cold War.

Register in advance at: