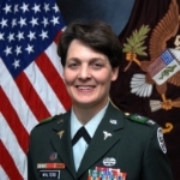 Lieutenant Colonel (LTC) Terry Walters’ job as Chief of the Internal Medicine Clinic at West Point was, in her own words, “comparable to any civilian physician’s”. But in March of 1993, Walters received orders to deploy to Mogadishu, Somalia, to serve as the Brigade Surgeon for the U.S. Army’s Quick Reaction Force (QRF), part of Operation Restore Hope.  She had one week to prepare.

In 1992, drought and civil war in Somalia created a famine.  The United Nations (UN) shipped in tons of food.  But armed militias working for local warlords stole much of it.  They wanted it for themselves, and they wanted their enemies to starve.

Like millions of Soldiers before her, Walters packed her bags and deployed, leaving behind her husband and three-year-old daughter.   Arriving in Somalia, she found herself in the capital of Mogadishu, a city of 800,000 people that had been shattered by years of revolution and clan warfare.  There, surrounded by walls topped with shards of glass, barbed wire, and guard towers, she could see the concrete buildings and tin shack communities of Mogadishu.

Walters described the situation in Somalia as “destruction everywhere you looked”.  Bodies lay in the street, victims of clan violence and mass starvation.  Marauding dogs hunted in packs, spreading disease and menacing people.  U.S. military veterinarians tried to remove the dangerous packs from the compound.  They tried poison, capture and release, and finally resorted to shooting the dogs.  Walters wrote:

“[T]he vets decided to commission themselves as a firing squad.  On the first day this execution squad shot several dogs.  However, not being marksmen, the vets shot a hole in one of the hospital supply tents.  Thereafter, the vets were relieved of this mission and a squad of infantry snipers disposed of the dogs.”

Somali snipers fired on the UN and U.S. forces by day.  By night, they switched to mortar fire.  Walters wrote that it was unlike anything she had ever experienced.

In an effort to reduce the violence, the U.S. tried to get the warlords to agree to put their weapons into storage. The effort seemed successful at first, but by the spring of 1993, one of the most powerful warlords, Mohammed Farah Aidid was openly defying the will of the international community. He began making plans to fight the U.S. and UN forces.

Aidid was a formidable foe, a well-educated former Somali Army officer who had attended the Frunze Academy, a military school in the Soviet Union.

“The peacekeeping phase of [Operation Restore Hope] ended abruptly on 5 June.  About 1030 I heard automatic weapons fire near the front gate… the city of Mogadishu had erupted.  At that point information was sketchy but it appeared that Somalis had sprung several different ambushes at once.  Mobs of armed Somalia suddenly confronted Special Forces soldiers who were inspecting the Radio Mogadishu compound and Pakistani forces who were inspecting two weapon storage sites.

“Apparently he was also concerned that the UN would take control of Radio Mogadishu.  This would seriously undermine one of his elements of power.  He issued a radio broadcast claiming [UN] forces had massacred innocent Somalis and urged an attack on [U.S. and UN] forces.  Aided [sic] also announced that any Somalis working for [the UN] were to be considered traitors and were to be shot.

“Within minutes of this announcement the Pakistanis and a few American troops were fired on…  There were ninety-four Pakistani casualties with twenty-two killed outright, sixty-three wounded, and nine missing…

“When I heard about all the casualties I ran to the hospital with a sight I will never forget.  I immediately went to work in the emergency room where I treated a steady stream of casualties for the next several hours…  One of the first patients I saw had been shot through the head.  The bullet had entered one ear and exited the other side of his head.  Believing his wound to be fatal I declared him “expectant” and moved on to the next seriously wounded soldier.  As I worked, I remembered a combat camera film of action in Vietnam that was shown on my first day of medical school.  The film was very graphic and showed plenty of blood and gore.  When the film ended the instructor, a former Army surgeon in Vietnam, told us that this was the raison d’etre for military physicians.  Back then, my unspoken reaction had been that was Vietnam and that was never going to happen again. Yet here I was, surrounded by wounded soldiers declaring a man beyond medical help.”

The wounded kept coming, some with multiple massive head and chest wounds. The hospital ran out of ventilators.  One medic had to sit over a patient for hours keeping him alive through manual ventilation. Contrary to what Walters had expected, there was “no screaming and very little moaning”.

“After nearly thirty-one straight hours I walked back to my tent feeling physically exhausted, yet at the same time on an emotional high.  I had trained for a situation like this for a long time and felt that I had done my duty.  I knew I had been an integral part of a team that had saved the lives of Soldiers.”

The peacekeeping mission was over.  The U.S. effort shifted to capturing the mastermind of the ambush, Mohamed Farah Aidid.  Within a month, the U.S. became embroiled in another pitched battle in the city, a battle recounted in the book and feature film Black Hawk Down.  Nineteen Americans were killed, and helicopter pilot Mike Durant was captured.  Celebrating Somalis dragged the bodies of dead Americans through the streets.

The American public had trouble understanding how a mission to feed people had turned into an escalating war with the very people we had gone there to help.  Public support for the effort melted away, and the U.S. withdrew from Somalia.

Terry Walters was one of 62 women to graduate from the United States Military Academy at West Point in 1980, in the first class which included women.  She attended medical school immediately after graduating from West Point and later earned a master’s degree in public health.  She served as Division Surgeon for the 25th Infantry Division (Light) at Schofield Barracks, Hawaii and Commander of the Barracks Army Health Center.  She commanded the 1st Medical Brigade based at Fort Hood, Texas in the early part of combat operations in Iraq and Afghanistan.  She assumed command of the Womack Army Medical Center at Fort Bragg, North Carolina in 2006.

U.S. Army War College Video – Black Hawk Super Six Four Pilot Mike Durant discusses the Battle of Mogadishu, October 3 and 4, 1993, during which he was shot down and taken prisoner.