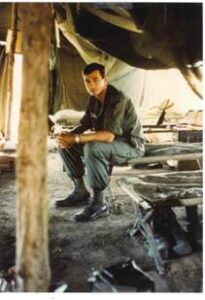 Army Specialist Four (SP4) Bill Beck was  an assistant machine gunner assigned to  the 1st Battalion, 7th Cavalry Regiment (1/7 Cav), 1st Cavalry Division on November 14, 1965, when the unit airlifted into Landing Zone (LZ) X-Ray in the Ia Drang Valley in Vietnam.  Little did Beck and his companions know they were about to make history in America’s first large scale battle of the Vietnam War.  Over the next three days, three battalions of the 1st Cavalry took on two regiments of North Vietnamese regulars.  Outnumbered and surrounded, they held on under the command of Lieutenant Colonel (LTC) Harold (Hal) Moore.  Resupplied by helicopter and supported by air strikes, the battle was the first test of the new doctrine of airmobility:  using helicopters to move troops into the battle area.  305 Soldiers died and 540 were wounded in the battle.

In 1983, Beck reconnected with Hal Moore, now a retired three-star general.  Encouraged by Moore, Beck, a professional artist, created sketches to document his experiences during the battle.  Moore and Joe Galloway, a combat correspondent who had been at LZ X-ray during the battle, co-authored the book We Were Soldiers Once….and Young, published in 1992.  The book was the basis for the 2002 feature film We Were Soldiers.

In 1993 Beck traveled back to the Ia Drang battlefield with General Moore, Joe Galloway, and Vietnamese veterans of the battle.  There on the ground, Beck recovered artifacts from the battle and confirmed the accuracy of his memory of the battlefield.  Several of his sketches are presented below.  Unless otherwise noted, italicized quotes are from an interview with Bill Beck, conducted at the Army Heritage Center Foundation in October 2015.  Photos and sketches are courtesy of Bill Beck.

So when we initially started, my buddy right in front of me got machine-gunned. I tried to catch up to Russell Adams, I’m his assistant, and there’s a gentleman, a soldier laying there dead. He was killed immediately.

I saw my lieutenant get shot and radio operator get shot. This is still on my travels up to Russell Adams.

When I catch up to Russell Adams, he’s firing at a North Vietnamese just ahead of him, I guess maybe 30 yards. There I am, just catching up to him, to Russell. He spotted the first North Vietnamese that I had seen since we landed . All I seen up to this time is all these guys getting shot and killed beside me and in front of me.

I had to leave Russell to get ammunition and…I was being shot at the entire time. I’d run ten, twenty yards and I had to dive on the ground to dodge these bullets…that’s when one threw a hand grenade out at me from the creek bed…big white burst, here it was a concussion grenade….[if it had] been shrapnel, I’d probably have been wounded seriously….I don’t event think I hit the ground.

This is when I’m up with Russell Adams and this is a fire that started from some grenades or tracer rounds or something. I had to put the fire out because it was coming up on us.

You can see the backpack here and I have the back pack [in the previous image]. In my drawings, I subconsciously did this. All of a sudden here, I have my back pack off…because it was too heavy for my running around and stuff and cumbersome.

And here I am on one of my trips back. I give first aid to Ray Taboada. He was a [lieutenant] that was severely wounded in the hand and in the leg. I took time out to help him out.

This is when these guys apparently threw the hand grenade at me, I was spotted and there was an American GI on this side and there’s two of them over there. And this is the creek bed going through there. I’m going back to my buddy Russell Adams. I took time out to fire at these two North Vietnamese and they went down.

This is back on the machine gun with Russell Adams. I spot this guy to the left of me and behind me, was shot in the chest. He was trying to get a drink of water. That’s the only thing I seen from my level on the ground was his arm sticking up.

And here I am giving him first aid, best I can. Called for a medic. Russell’s on the machine gun.

This is when I return to Russell.  This is how I found him.  He was laying on his side, the machine gun, er, on his back, the machine gun was on its side. And that was it, he was looking at the sky.     I called for a medic and they took him out.

Beck returned to LZ X-ray in 1993 on a tour arranged by ABC News.  The group included General Moore, a number of American veterans, and some of their North Vietnamese counterparts.  When exploring his machine gun position, Beck found part of a helmet which evidence suggests belonged to Russell Adams, still on the battlefield almost thirty years later.  Adams survived his wounds.

And this is when I’m on the machine gun by myself.  See my ammunition laying on the ground…when the [Skyraider is] being shot down.  He was making bombing runs down there and I was keying off of him because the enemy was coming out of the jungle here.  So I was keying off of where this guy was doing the bombing runs…because he had a better view of the North Vietnamese coming out of the mountain than I did…but he got shot on his trip down this time and it burst into flames and went over in the jungle and was killed.  He was alive when I watched him in there when he went by.  I had a real clear view and he was looking down at me actually,  not at me but at the landing zone.

This is, this is what I saw with the, on one of our assaults with the, across the creek bed.  Company Commander Tony Nadal and his radio operator [was] shot and killed.  I witnessed that.  I told Tony.  Tony turned around to look, I guess he wondered what pulled him back.  I told him, I says pull the phone right out of his hand.  Tony turned around and looked and there was nobody there.  This gentleman’s laying on his back.  Then Tony drug him back to the creek bed.

For the rest of the day and again the next day, November 15, Beck’s company continues making assaults across the creek bed.

This is one of the assaults from the creek bed and,..shows our dead and wounded in here…Tony Nadal first up over the top, said “follow me.”

This is one of the scenes I saw when we were making a creek bed assault was this fella here giving a North Vietnamese a bayonet, in the chest.  This guy turned out to be John Rangel, [who] wrote the same story, basically.  Years later when I ran into…John Rangel…I said “what did you do after that?” He said, “well, I turned around.”  He said “ I knew we were out there too far.”  Hand to hand combat.  He said “I turned around, to go back towards the creek” and he got shot, got creased in the neck…he said that ended his day.

This was a night deal.  We were out, this was my buddy Dillard Burnley, who was killed at Bong Son, and I.  We sat back to back.  They [were] dropping flares over the landing zone and by the mountain and I still remember  the illumination.  It was a real dark night and [tracers] illuminated the area.  The bad thing about flares was when they would come down, they’d sway and so everything on the ground moved.  All these shadows on the ground moved so…you couldn’t tell if it was the enemy or what shadows so you just held your fire, but there was a firefight off to the left over here which turned out to be C Company.  They were, were being attacked at one point.  But in our area we were pretty secure that night.

The thing is the enemy had orange and green tracers.  Something I learned over there.  And we had red tracers and, uh, so you could distinguish who was who when you were fighting, you know.  It’s like an oxymoron or something, you know. I guess you use tracers to spot your target and mark your target but it also lets the enemy know where it’s coming from too.  And I, but I remember one thing  about tracers is [points to left of tree] is they’d be using the green and orange tracers, you could see when they got shot , the enemy, because a lot of times, and this is at nighttime, as, when they would get shot, all a sudden their bullets would go straight up in the air.  And they’d get shot and take their rifle with them and you’d see a burst of shells going up in the air so you’d know you’d hit your target…this is the second day, early in the morning.

Burnley and I, second day.  They were doing bombing runs and, to this day, I didn’t know if  it was a bomb or artillery shell, landed close to us and it covered us with some dirt.  Drawing is a little exaggeration to show the dirt.  I kept a lot of the dirt on us but that’s how close it was.  And, trust me, I was like deaf from  that moment on in my left ear…All I know is I got bounced off the ground and we got covered with dirt.  [A sergeant] said “well, one Syraider dropped a bomb, 150-lb bomb.”  He says that when he dropped it, he missed his target.  He overshot his target.  He said it looked like a softball up there and all a sudden it looked like a basketball, it looked like a watermelon…It got bigger and bigger until he had to hit the ground.   So, anyhow, that was, I never did know what it was but he told me it was round.

This is, this is the 16th when we did the body counts.   The LZ was back there and Captain sent other guys, we all fanned out to do body counts.  And there’s a tree stump here, broken off tree stump.  This guy was seriously wounded, the North Vietnamese,  and, uh, we were dragging him back to the LZ to have him evacuated.  He didn’t make it.

Bill Beck created a map to show the location of these events.

Moore, Harold C. and Galloway, Joe.  We Were Soldiers Once…and Young: Ia Drang – The Battle that Changed the War in Vietnam. Random House, 1992