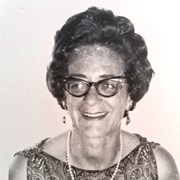 Ruth Rappaport was born on May 27, 1923 to Mendel and Helene Rappaport, a Jewish couple living in Leipzig, Germany. Growing up, she learned English in high school, where many of her instructors were professors from Heidelberg University. Through immersion classes, she studied to be a translator.

When the Nazis came to power, Ruth and her family faced persecution along with the rest of the Jewish community. But because Ruth’s father was a Romanian citizen, she had a Romanian passport that did not identify her as Jewish. Although she was suspected of being Jewish, no one could prove it, so she was able to move about Leipzig freely. While doing so, she saw the harassment and persecution of Jews, the burning of books by Jewish authors, and the destruction of synagogues. Years later, she would say that she wanted to see such things because it gave her a sense of control to know what was going on.

On the night of November 9, 1938, a nationwide pogrom against Jews swept Germany. For two nights, rioting crowds, instigated by the Nazi regime, vandalized Jewish businesses and attacked synagogues. The event became infamously known as Kristallnacht, or Night of the Broken Glass, for the shattered glass that littered the streets. Warned by some German neighbors, Ruth stayed home during Kristallnacht.

One frightening event she witnessed involved a group of elderly Orthodox Jewish men that were lined up facing a wall by Nazi soldiers. The soldiers fired their rifles over their heads in a mock execution. Ruth exclaimed, “In some ways that was worse because you heard the shots and they were still standing!”

In December of 1938, Ruth and her family travelled to Switzerland. There, the sixteen year old made the momentous decision not to return to Germany. When the time came to board the train to return, Ruth slipped away from her mother and got off the train. She lived on her own in Switzerland for a year, then moved to the United States to live with her uncle in Seattle. Sadly, her parents never escaped from Nazi Germany. They both died in 1943, two of the more than 12 million victims of the Nazi death camps.

Like many of her generation, Ruth was an ardent Zionist. She worked for Zionist causes, writing stories and travelling to the newly formed state of Israel in 1948 during the War of Independence, where she participated in the fighting and worked in the Foreign Press Office, a job she got through her friend, Golda Meir. She had met the future Prime Minister of Israel at an event in Seattle.

Ruth returned to the U.S. in 1950 and resumed her education, graduating from the University of California, Berkley with a degree in Sociology and a minor in Oriental Societies and library training.

Her experience with the U.S. military began in 1959, when she went to work for the Air Force, managing the library at Naha Air Base in Okinawa. In 1963, she accepted an offer from the Navy to manage the libraries in Saigon. She made it a condition of her employment that she would tolerate no censorship in her library. In 1966, the Army took over management of the libraries, and Ruth stayed on.

Ruth oversaw the growth of the library system in Vietnam from a handful of books to a system that included 39 branch libraries and 117 field collections. She made sure that the libraries included many volumes on Vietnam, in the belief that better education made for better Soldiers. Ruth built the library staff and lobbied for an expanded budget and programs. By the late 1960s, her libraries had a budget of $4.5 million for books. With these funds, she acquired 120,000 volumes for the permanent collection and more than 4 million paperbacks and 200,000 magazine subscriptions for the expendable kits that were sent out to Soldiers in the field.

After her service in Vietnam, Ruth went to work for the Library of Congress. She retired in 1993 and spent the rest of her life as a community activist. She passed away in 2010.