Skip to content
Close
Born in 1877, the grandson of a slave, Benjamin O. Davis entered military service during the Spanish-American War as a temporary FirstLieutenant of volunteers. Mustered out after only a year, he immediately reenlisted in the Regular Army and was assigned to a cavalry unit. In the years that followed, he rose through the ranks as he served in various positions including several tours of duty in the Philippines and posting as a Professor of Military Science at Wilberforce University and the Tuskegee Institute. He patrolled the US-Mexico border with the 9th Cavalry; served as commander of the 369th Infantry, New York National Guard; and as a brigade commander with the 2nd Cavalry Division; and served as Assistant to the Inspector General in Washington, DC.

Davis also served detached duty with the Pilgrimage of War Mothers and Widows from 1930 to 1933, escorting family members to the graves of their loved ones in Europe.

Promoted to Brigadier General on October 25, 1940, the first African-American general in the US Army, General Davis retired on July 31, 1941 and was recalled to active duty the next day. During World War II he continued to serve in the Inspector General’s office, and, in 1942, was assigned to the European Theater of Operations for special duty as Advisor on Negro Problems.

Decorated with a Bronze Star and the Distinguished Service Medal, BG Davis’ 50 years of service came to an end on July 14, 1948 when he officially retired.  He died in 1970 and was buried at Arlington National Cemetery. 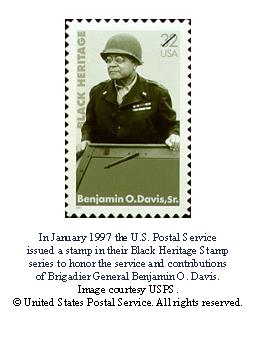 The Benjamin Oliver Davis, Sr. Collection is housed at the US Army Heritage and Education Center and is available to researchers and historians.  The collection spans the years 1893-1974.  The bulk of the material pertains to the period from 1941 to 1945. The collection documents Davis’ fifty years of military service from 1898 to 1948 and consists of seven series: Correspondence (Sub-series: Official, Personal, Retirement), Official Papers, Personal Papers, Speeches, Printed Materials, Photographs, and Oversize.  To view the catalog of the Benjamin O. Davis Collection click here.