Luther Prentice Bradley was born to Luther and Nancy (Prentice) Bradley on 8 December 1822 in New Haven, Connecticut. He received his education at schools in New Haven, served for several years in the Connecticut militia, and was commissioned a lieutenant in 1850. In 1855, he moved to Chicago where he entered the book business and served in the Illinois militia.

At the start of the Civil War, Bradley recruited troops for the Union. In October 1861, he received a commission as a lieutenant colonel of the 51st Illinois Infantry Regiment. During the spring of 1862 he participated in the capture of New Madrid and Island No. 10 in Missouri and in action against Fort Pillow, Arkansas, and Corinth, Mississippi. Bradley commanded operations against guerillas in Decatur, Alabama during the summer. In October 1862, he was promoted to colonel of the 51st Illinois Infantry Regiment. Bradley commanded a brigade at the Battle of Stone River, as well as at Tullahoma and Chickamauga. He was wounded twice at Chickamauga.

In early 1864, Bradley reenlisted with the 51st Illinois Infantry Regiment for three years. He served in the Atlanta Campaign from May to September 1864. In July 1864, he was appointed brigadier general of volunteers and participated in numerous battles in the South. Bradley was wounded again at Spring Hill, Texas in November, 1864.

After the Civil War Bradley resigned his commission, but in July 1866 he returned to active duty as a Lieutenant Colonel of the 27th Infantry Regiment. Bradley moved out west, where he oversaw the construction of Fort C. F. Smith in Montana and participated in the Indian Wars against the Sioux and Cheyenne in Montana, Nebraska and Kansas. In May 1868, he married Ione Dewey in Chicago, Illinois. They would have two sons together, William and Robert. 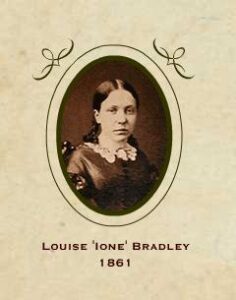 From 1868 to 1872, Bradley commanded various posts in Nebraska and Wyoming. He was transferred to the 9th Infantry Regiment in March 1869. In 1873, he commanded infantry soldiers who accompanied engineers planning part of the Northern Pacific Railroad. Bradley then commanded two different districts in Wyoming from 1874 to 1876. In 1877, he was in Nebraska and oversaw members of the Sioux tribe who had surrendered.

Bradley was present at Camp Robinson when Crazy Horse was killed. Although Crazy Horse has stated his intentions to surrender, Bradley had orders to arrest the Indian fighter. Crazy Horse resisted. A Soldier stabbed Crazy Horse with a bayonet and he died shortly thereafter.

On 8 December 1886, Bradley retired at the mandatory retirement age of sixty-four. He lived most of his retirement in Tacoma, Washington, and was involved in the community. Bradley died on 13 March 1910 and was buried at Arlington National Cemetery. A newspaper article reporting his death commented on his good character, noting that his “agreeable manner won him many friends.”